Since 1951, Bueno Foods (El Encanto, Inc.) has grown into one of the Southwest’s premier producers of New Mexican and Mexican style foods, serving restaurant and retail customers throughout the U.S. 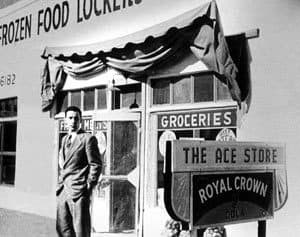 Bueno Foods started out as a small neighborhood grocery store called The Ace Food Store. In 1946, several brothers, members of a long-time New Mexican family, had just returned from serving in World War II when they scraped together enough money to start a grocery business. At first, the small operation was quite successful . . . that is until grocery store chains started infiltrating the Albuquerque market. The Baca brothers soon found out their small “mom and pop” store could not compete with the Piggly Wigglys and Safeways of the world. They wanted to make a go of their business however, and they began to think of ideas to make their enterprise work. 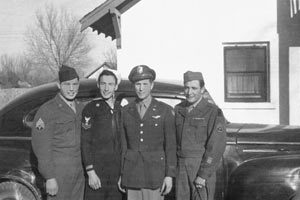 At first, they started integrating their mother’s delicious cooking into their business, adding a carry-out component to the store. The homemade traditional dishes were a hit but the Baca brothers realized, the carry-out couldn’t sustain them forever.

At this time, they formed a partnership, manufacturing corn and flour tortillas on a pie crust roller, tamales and posole. 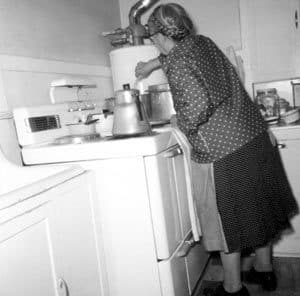 They moved their operation from Bridge, around the corner to Airway, the site of their childhood home. Then, the Baca brothers had an idea. They talked about it around the supper table with their mother and father. They talked about it day and night. It was the early 1950s and every household was getting a freezer. Birdseye frozen vegetables were becoming the rage.The brothers asked themselves two questions: “Why couldn’t they take their heritage and preserve it, so to speak? Why couldn’t they start with an autumn tradition and use freezers to make it last until the following year’s harvest?” In other words, they had the idea to take chile, roast it over an open flame as the wonderful New Mexico autumn tradition dictated, and freeze it so that people could enjoy green chile year-round. 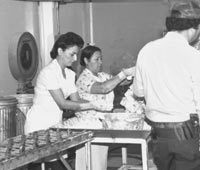 The Baca brothers were the first to flame roast green chile on a commercial scale. There was no equipment for this kind of process, so they had to build it. There was no process, so they had to invent it. And so they did, more than 60 years ago. With a handful of products as their focus, Bueno Foods was born, founded in 1951. So, for over half a century now, Bueno Foods has grown steadily from a small neighborhood grocery store into one of the Southwest’s premier producers of New Mexican and Mexican foods, still owned and operated by the Baca family. Consistent quality and service, customer responsiveness, innovation and hard work have resulted in Bueno’s steady upward growth and success.

More from the BUENO® story:

We take great pride in the fact that our comprehensive food safety program has received accolades by third party auditors who audit thousands of companies world-wide. We are SQF Certified (Safe Quality Food part of the Global Food Safety Initiative), one of only a handful of companies in our industry to receive the premier food safety certification. Superior food safety and premium quality are our passion and our promise.

Excellence is the Bueno Foods’ Standard. Our dedicated, well-trained Quality Assurance staff ensures every product’s superior quality and consistency. Every incoming ingredient and every outgoing product must meet strict specifications; a sample from each batch is tasted by a member of the Baca family and QA personnel. Our goal is your complete satisfaction and ultimately, your delight.

Bueno Foods is about Authenticity. We take great pride in preserving our cultural heritage through the products we produce and have remained true to tradition since our inception. Our flame roasted green chile celebrates the wonderful New Mexican autumn roasting tradition. Our prepared products are based on old Baca family recipes. We make our corn tortillas with yellow, white, and blue corn that has been stone ground using grinding stones (lava rocks) that are regularly sculpted and etched by hand and have been incorporated into our machinery. The result is premium quality and homemade taste.

Bueno Foods values creativity in our pursuit of excellence. We take great pride in our ability to translate authentic New Mexican cuisine from home recipes into commercial production by incorporating innovative techniques and state-of-the-art technology. Since the beginning, our company has implemented inventive techniques and processes when none were available and has been the industry leader, implementing new ideas, techniques, and technology for the purpose of continual improvement. We were the first company to develop commercial equipment to flame roast and freeze green chile, translating the New Mexico autumn tradition to a larger scale. Up to that time, people could only enjoy green chile at harvest time.

Jacqueline “Jackie” Baca, an M.B.A. graduate of the University of New Mexico, has been president since 1986. Jackie started work in the plant at the age of 16 on the production line.

Gene Baca, a 1986 graduate of the Harvard School of Law, is senior vice president. He co-founded and served as president for six years of the New Mexico Chile Association, a non profit organization whose mission is to save the New Mexico chile industry. He currently serves on the Board.

Catherine Baca, M.D. who holds a biology degree from University of New Mexico and a master’s in public health from Harvard University, is a pediatrician who brings to the company a focus on health to both the food product and the workplace. She is vice president of technical services and leads the company’s research and development.

Ana Baca, M.A., a published writer and graduate of Stanford University and the University of New Mexico, is vice president marketing & communications.